by Emily Medlock
3 years ago3 years ago
87 shares 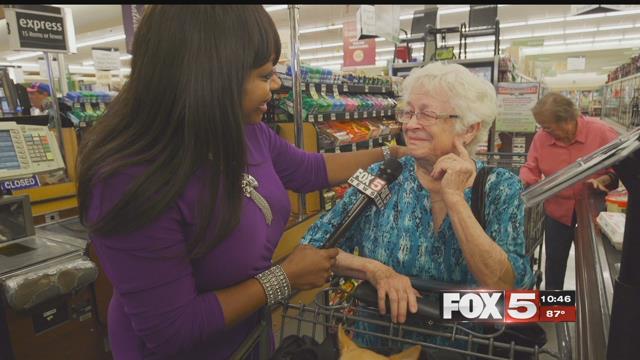 Fox 5 Vegas is a TV network in Las Vegas. Nevada. Like many networks, they have charity projects, but it seems like this Fox 5 takes it to an entirely new level as they observe and really take a look at where they’re needed.

Their project is called Surprise Squad and they specialize in doing really amazing things for people in the most unexpected way. Lately, they’ve been doing a regular project where they visit Albertsons Supermarket and offer to buy people’s groceries for them.

One of their first encounters was with a retired army vet who was eating just two meals a day and living off of a fixed income. Another family they helped was a family of four who had only enough to get two packs of chicken. The network took them shopping allowing them to get a whole cart full for their family.

Even if all of the veterans and families they were helping out, the employees seemed just as pleased as anyone. They were touched by the generosity and thought put into helping the people who couldn’t afford the groceries they needed.

One lady was in tears because she, a diabetic, didn’t have enough money for her insulin she required to survive. Her and her roommate had to skip buying groceries and it still wasn’t enough. Another woman was shopping for her mother’s memorial and was serving sandwiches. She couldn’t help but tear up when Monica, the reporter, offered to buy a decent meal for the people who would gather to mourn her mother’s death while celebrating her life. The woman who holds the memorial says she always opens the party to anyone who happens buy, allowing them to eat with those acknowledging her mother’s death.

The store manager, Steve St. Pierre was very obliged that Fox 5 visited his store. He admits that the community his store is located in is a low income community. That ever dollar counts to his shoppers. He says he notices a lot of peanut butter and jelly when the shoppers would rather have some protein. To be able to see a few regular shoppers have the opportunity to receive a balanced diet for a week was just amazing to watch.

You can rest knowing that the reporter, Monica received many hugs the day she visited Albertsons. The people were forever grateful and will remember the moment for the rest of their lives. The only note the news team has was to remind everyone to keep paying it forward, and make yourself a blessing to everyone you meet.