by DailySpikes Staff
3 years ago3 years ago
142 shares

A small puppy has been saved in China after being abandoned by the side of the road and having both of its legs “ripped off.” 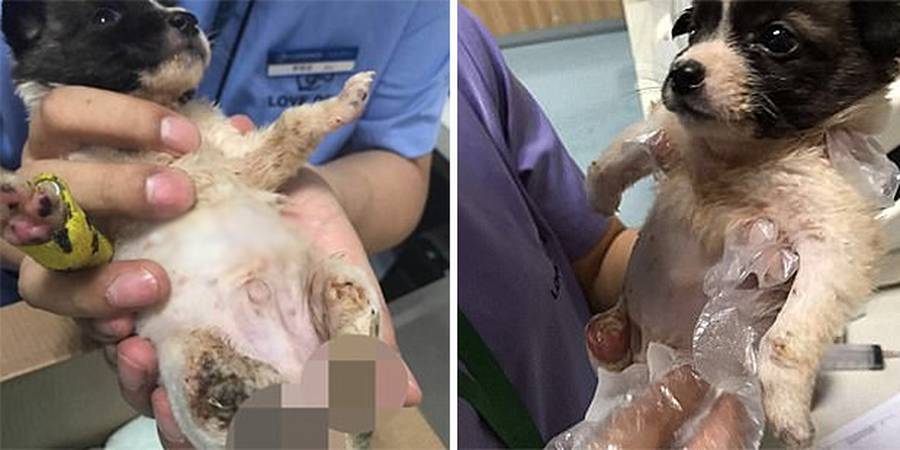 According to Qiming Small Animal Protection Group, the pup is less than a month old and was found in Chengdu on the side of the road earlier this month.

The young dog, a boy, was found on Shengtai Avenue in Chengdu’s Wenjiang District by one of the group’s volunteers on July 17, said Tong Tong, a spokesman from Qiming Small Animal Protection Group.

When the dog was found, both of his hind legs were nearly torn completely off from his body, and the puppy had been using his forearms to crawl at the side of the road, said Tong Tong.

‘We don’t know how the dog got injured or who attacked it, but it seemed like someone had try to rip off its legs deliberately using their hands,’ said Tong Tong.

The spokesman added: ‘We are horrified by the incident and we condemn the person who has given the small puppy such shocking injuries.’

Tong Tong also added: : “Judging from our experience, people usually hurt animals in a cruel way when they are under extreme stress or anger and want to release their emotions.”

The animal group took the tiny puppy to a vet, who then performed a leg amputation on it. The puppy has been “extremely strong” and was recovering well after the operation, said the vet.

The animal group believes the puppy was from a stray dog.

Prior to taking the dog to Chengdu Xin Zhi Lv Veterinary Clinic, the group gave it basic treatment.

The vet, Li Xiaokun, said he and his colleagues decided to perform amputation surgery because “it was not possible to have them re-attached to its body.”

Dr Li explained: “The dog’s hind legs were dead from the ankle down and worms had started to grow on them.”

He added: “The operation was risky because the puppy was so young. However, it was extremely strong during the operation.

The puppy was also missing some skin around his ankle, but the clinic plans to give him a tissue expansion operation in about a month to ensure the wounds will be full covered, said Dr. Li.

Ultimately, once the puppy recovers, the clinic will make it a wheelchair to help it walk.

The puppy has been named Fu Rui, which translates to “free” in English after receiving the most votes from the people who donated money to the dog on Chinese social media platform, WeChat.

The group is also raising funds for the puppy’s operation through an online donation page. They hope he will grow up safe and healthy.

“We hope its mind would be free and not restricted by the fact that it does not have hind legs,’ said the animal group. 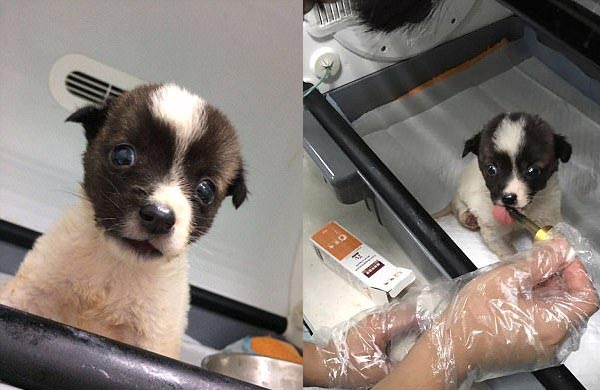 Tong Tong, the spokesman, said: “At the moment, there is no law to protect animals’ welfare in China. There is a draft under consideration, but no official legal policies have been passed.

“However, considering the scale of underground animal meat trading industry, I think it would be challenging for the authority to approve related law anytime soon.”