by DailySpikes Staff
3 years ago3 years ago
74 shares 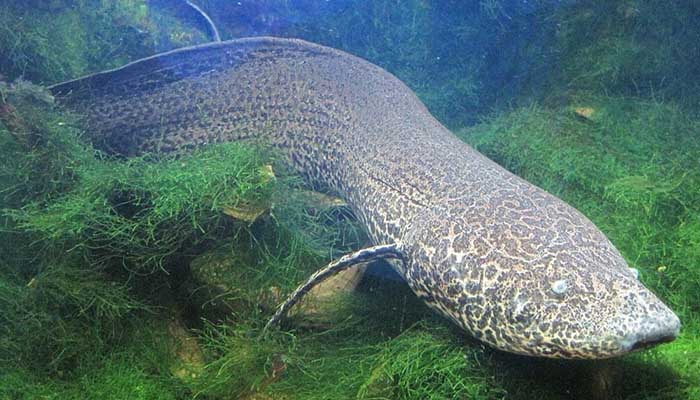 The salamanderfish, a freshwater fish more commonly known as the lungfish, is quite an impressive fish. The salamanderfish sustains the ability to reside not only in water, but on land as well.

This freshwater fish can survive on dry land for months, or even years, with no access to water at all.

The remarkable salamanderfish is often found only in southwestern Australia and typically lives in a small semi-permanent pool and stream. However, when the pools dry out, the salamanderfish simply burrows down into the damp bottom sand.

How do they do it?

Over the years, the salamanderfish’s respiratory system has evolved to such an extent that the fish are able to breathe air just like any normal land animal. The fish simply takes in the air and absorbs the oxygen.

Some species have even evolved so far that they eventually completely lose the use of their gills as they age. In this case, the salamanderfish will still swim in fresh water, like a normal fish, but they will have to surface to breathe fresh air.

Just like a human, of you held them underwater too long without any access to air, they would actually drown.

But, when the water dries up and the fish is just living in damp sand, it uses the mud to breath. The salamanderfish actually takes mud in through its mouth and then forces it out through its gills.

While in this environment, the fish goes into a period of hibernation and lowers its metabolism. The salamanderfish will continue to go deeper into the damp sand, until it is deep enough, where it will secrete a thick, sticky mucous through its skin.

This mucous will harden to form a cocoon type structure to protect it. When the seasons change and the water returns, it will simply worm its way out of this little hole.

Actually, yes. Sometimes. The salamanderfish has a long, thin body, much like that of an eel. While in the water, they will crawl and swim around, just like other fish, looking for food.

The fish prefers to use their thin pectoral and pelvic fins to propel them along the murky bottom of the water. They also prefer to remain in shallow water, such as a swamp. But, occasionally, they can be found in larger bodies of water.

Their eating habits are in line with other fish, as well. The salamanderfish swims around and consumes other smaller fish and crustaceans that they come across on the floors of the bodies of water that they inhabit.