by Samantha Roberts
5 years ago5 years ago
423 shares 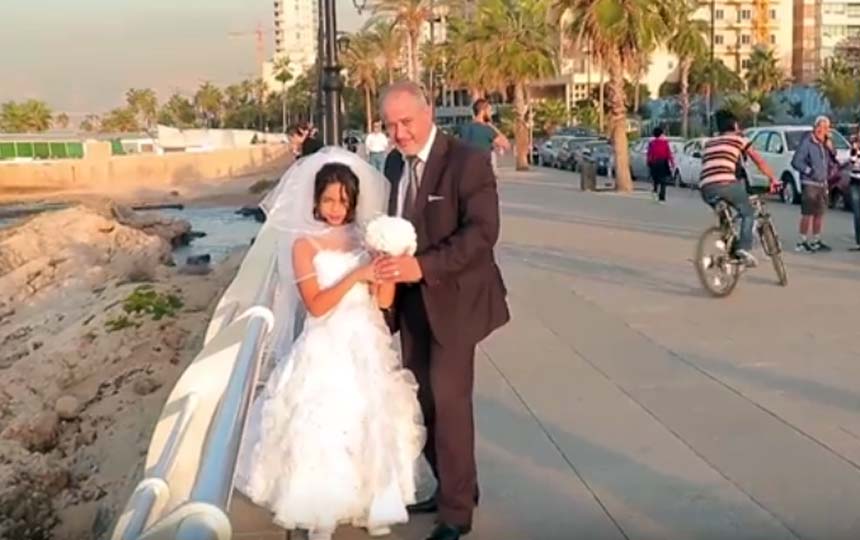 Twelve-year-old girls in white dresses and veils standing next to an older man should make us think of a girl taking her first communion and being photographed next to her father, or grandfather. But, sadly, in these photos of little girls in white from Lebanon, that is not the case. Instead, these are child brides.

Lebanese women’s rights organization, Kafa, has recently released this video show a little girl posing in a wedding gown with a man old enough to be her grandfather—but he’s her groom. 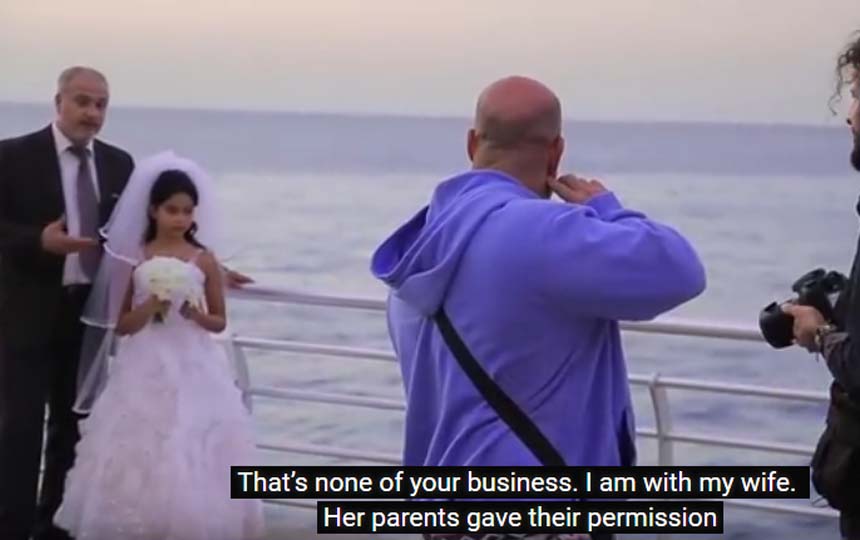 And, even more sadly, several pedestrians are shown in the video stopping by to congratulate the man on their wedding. However, other passers-by were appalled by this underage bride, with one man even threatening to throw the groom into the sea. Another woman who was out for a jog stopped to ask where the bride’s parents were.

Kafa (which means “Enough” in Arabic) has been working hard to raise awareness about how common underage marriages are in Lebanon. Currently girls in Lebanon can legally marry at age 17 without parental consent. But with parental consent, the age is as young as only 9 years old. Lebanon is apparently working on drafting laws to regulate the marriage of children, but there is still a great deal of controversy over this as many religious community laws are involved.

Underage marriage is prevalent not only in Lebanon but in many places in the Middle East.

Although it is traditional in Yemen for girls to get married to men who are much older than they are, recent laws have been put into place that put the legal age to marry at 18 years old. Previously, according the Human Rights Watch, over half of Yemeni girls were married off prior to turning 18—and some of them as young as 8 years old.

Egypt is another country which has the legal age of marriage at 18, but there are still plenty of instance which show that underage marriage continues to happen frequently.

From a worldwide standpoint, statistics show that underage marriage affects at least 15 million girls each year. In 2014, the UN General Assembly called for all countries to put an end to child marriage. Not only are child brides more susceptible to sexual abuse and domestic violence, but women under the age of 20 who bear children are at a much higher risk—girls under the age of 15 who give birth are 15 times more likely to die. Some estimate that the babies born to these younger women (under age 20) are 50% more likely to die within the first few weeks of life.

Although this video isn’t likely to end the problem, hopefully it will help Kafa in its efforts to raise awareness and begin protecting these young girls from the troubles and abuse that can come from getting married much too young.